Dive into the well-known Myths of Lovecraft in a whole new way with this immersive, first-person, Point & Click, Graphic Adventure, with a taste of Survival Horror

You will have to investigate mysterious events in order to find who is hiding behind all of the madness. But you may find something you were not looking for, since discovering what is happening will take you into a world of darkness, terror, and insanity, this is a DESOLATED world.

Be part, like never before, of an exciting mystery based on Lovecraft’s Mythos, full of puzzles, sects, and primordial deities.

You will have to walk in the shoes of four characters with four different paths and destinations... but, be careful! The decisions you make can have unexpected consequences that will lead you to different endings. Will you be able to avoid more murders? Will you find out who is behind or will you prefer to be part of some ritual? In DESOLATIUM you will set the course of the adventure.

Carter wakes up on a bed in a strange room. He can’t remember anything, not even his own name; when he looks around he suspects something is not right. He needs to escape from there and find out what is happening. When Carter's friends discover that he has disappeared, the true journey begins. What if all the myths and creatures they had read about were real?
Get inside their head to investigate all the clues and hints, each with their unique abilities and characteristics. Will they be ready for what they may find? Will you be?

We just updated January and February devlog. We're working so hard on Desolatium to bring you the best experience!

We released DESOLATIUM: PROLOGUE! A short game that expands the universe of DESOLATIUM. 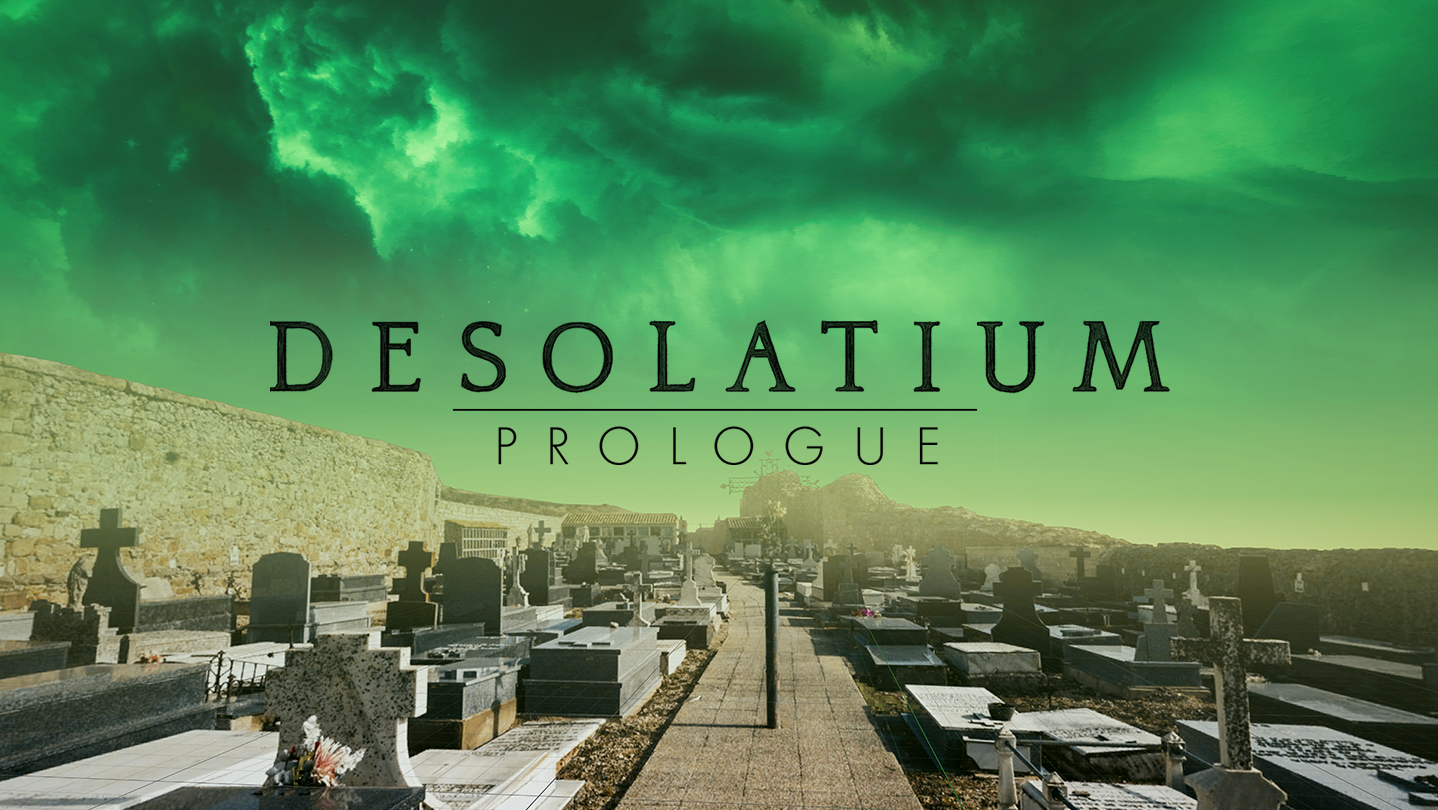 A few months ago we came up with the idea of making a shorter game, while we keep developing DESOLATIUM, in order to make the wait more bearable. And this is how DESOLATIUM: PROLOGUE was born.

It was at first published free for our backers to try it and thanks to their feedback, we developed a new and improved version.

We have always believed that God sent his son into the world to save us. But, what if that is not what happened? What if the world cannot be saved? The real story is about to be revealed.

You will explore a city outside the limits of time and space; meet mysterious characters who will guide you on your journey; interact with the objects around you to solve complex puzzles in order to get to the terrible presence of a cosmic entity of immense power: Cthulhu.

The time has come to answer the call of The Great Dreamer. 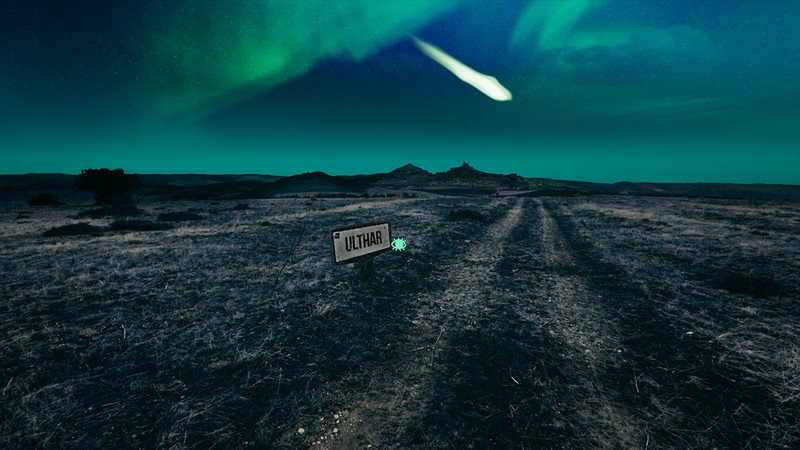 WHAT WILL I FIND?

The wind violently blew the snow, reducing vision beyond his outstretched hands; He couldn’t even see the trees in the forest anymore. The blizzard was getting stronger and he needed to get to shelter as soon as possible. Suddenly, the wind stopped, time seemed to freeze, and a clearing appeared right in front of his eyes. There was a circle of stones of different sizes, and inside there wasn’t a single snowflake… just a tall figure with long arms and strong legs. It wore no clothes despite the cold, and its face was covered by a thick mane of hair, from which a greenish glow emerged.

2021 has arrived and we have started the new year stronger than the previous one. The game is going up ahead, but we want to share our roadmap with you.

Initially we keep our delivery date, June 2021. Luckily, the whole team has avoided the virus for now and we can continue working without too much trouble.

By the end of this month we will have finished 100% the game script, including all texts, dialogues, notes, etc. As soon as the script is ready, we will sacrifice the scriptwriters and turn them into undead to the service of the chief programmer.

We will start the production itself, a.k.a. shooting in location, recording characters’ voices and a long etcetera. We will send our byakhee to lead the way and prepare our arrival.

We will go on with the production and we’ll start integrating the scenarios with the programming. By that time, we will have a very special "demo" ready. More than a demo, it will be a brief game in which you will be able to discover a part of the lore of Desolatium. It will be free for backers, as a token of appreciation for your support.

We will have the Soundtrack ready and we will continue working to finish the Alpha Version. At this point we will need another great sacrifice ...

…that will help us in the testing phase which will begin this month. The game will already be finished, the beta testers will receive Desolatium to test it and help us achieve a solid adventure. We will put the finishing touches and fix bugs, balancing issues etc. as the beta-testers find them.

The game will be finished and ready for you to enjoy on PC and Oculus. Matching this date, Cthulhu will wake up once more and turn the seas into a boiling hell.

We will begin the ports for consoles. Using the blood of the PC and Oculus versions’ programmers we will create new monsters to work on the console versions.

Everything was completely silent and there was not a soul in sight, not even the wind dared to blow across that part of the city. Trash piled up in the corners, but no rats or other kinds of vermin could be seen. Only a putrid smell remained in those streets.
When she reached her destination, she saw some dim lights at the entrance of the building. They were pumpkins, arranged on both sides of the entrance; inside of each of them the dancing flames of two little candles. Just as she passed between them, a lonely gust of icy wind gave her goosebumps and a sudden itch on the back of his neck made her turn. The carved face of one of those pumpkins was looking at her and ...

We are already on Halloween, a somewhat strange one, but for that same reason we don’t want to miss the spooky vibe. We have news for you… Desolatium has undergone a small (or big?) makeover, and we want you to be the first to see it and give us your opinion!

A new addition to the team has brought a lot of new ideas that we have loved, and hopefully you will too. The new look is a bit more ... cthulhean. We wanted to give Desolatium a bit of that pulp air that accompanied Loveraft's works, integrating rituals, mystery and terror. Judge by yourselves and tell us what you think. On the other hand, on the 31st  we will release a new version of the demo with some improvements. It will be a special Halloween version, with new implementations and the already mentioned makeover. It will be short, but we want you to get an idea of how the game is progressing.

And finally, since we are on Halloween, what could be better than some dark movie recommendations? Here you have some: "Underwater" (2020), a movie that would be just “fine” if it were not for its ending. We will only tell you that it is worth seeing what lurks in the depths... "The Mark of the Demon" (2020), we weren’t sure about this recommendation, but the Necronomicon is in it and anything that smells of Lovecraftian mythos must be seen. Even so, we warn you that it is not... well, see for yourselves. And finally “The Endless” (2017), a highly recommended film about two brothers who return to a sect many years after escaping from it, upon receiving a tape from their former brothers.

Reply
Neco The Sergal2 years ago(+1)

Gave the game a try -

Wooo, awesome! We just watched this. Thanks for your time. we are working a lot in the game right now and making some cool stuff.

We hope to have a new demo with news really soon ;)

"All the seals have been broken, all the words have been recited and all the sacrifices are lying on the ground oozing blood. We have succeeded."

We have finished the Kickstarter campaign exceeding our expectations. Now it's time to work hard to get Desolatium to exceed yours. We will keep you updated on our progress to show you how everything develops. There may be some surprises… but we don't want to anticipate anything yet.

We can only thank all our backers for the trust you have placed in us, we hope to be worthy of it. 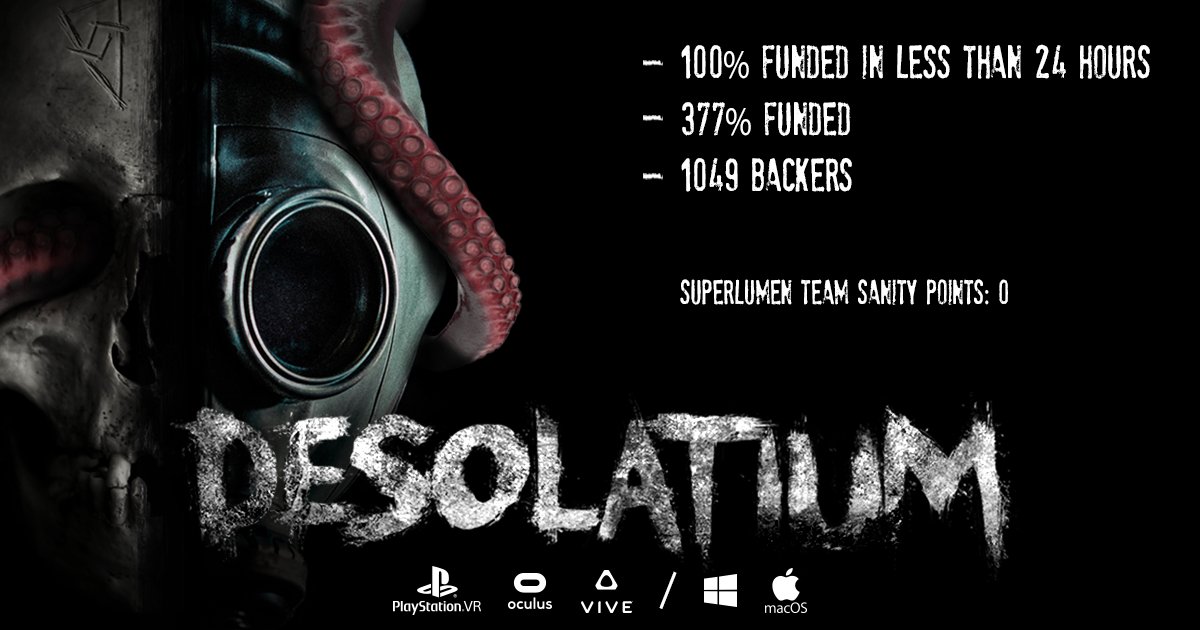 Even though Kickstarter is over you can still support us through Indiegogo!

Get the game for a limited price and exclusive rewards -> https://indiegogo.com/projects/desolatium-graphic-adventure-based-on-lovecraft…

Thank you very much and  iä! iä! Cthulhu fhtagn!

Our KickStarter campaign is being amazing, thanks for your support guys, we have been founded in less than 24 hours.

BUT there are few weeks left, so don't lose the opportunity to be part of the game

#DESOLATIUM will be available for VR and non-VR platforms.

Thanks a lot! We are working in the lore and art of the game so we hope to have news soon.

You can SET A NOTIFICATION right here:

looks very juicy.. but is this only for VR?

Thanks for your interest!

Sorry but at the moment we are developing only for VR.

Finally we are developing Desolatium for desktop too :)

You can SET A NOTIFICATION right here: 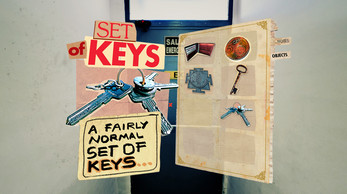 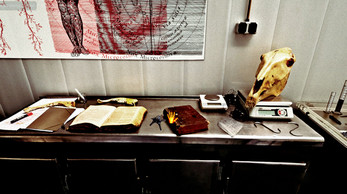 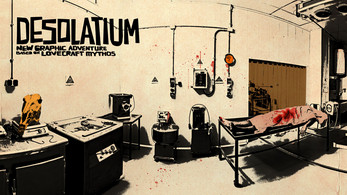 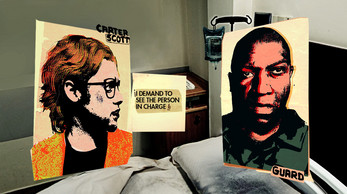 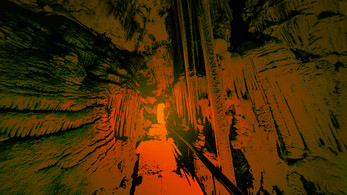